Here’s a quick guide that will help you better understand our faith.

The second largest religion in the world, Islam is the continuation of God’s revelation that was sent to prophets at different times and places throughout history. It is a continuation of the message received in the Torah (Old Testament) and the Bible (New Testament) and is rooted in belief in the same God, many of the same prophets and messengers and a similar set of values through various teachings. Muslim believe the Quran to be the final revelation from God to humanity, which He delivered through a man named Muhammad. For nearly one-fourth of humanity, Islam is both a religion with beliefs and rituals and a way of life with character and values. Islam is an Arabic word which means both submission and peace, and generally refers to peace achieved through acknowledgement of and service to God. Allah is the Arabic word which means “the one God,” and is used by Arabic-speakers of many faiths.

What do Muslims believe?

As revealed in the Quran, Muslims believe in:

What are the Five Pillars of Islam?
How does someone become a Muslim?

Simply by saying the declaration of faith, “There is no god apart from God, and Muhammad (PBUH) is the Messenger of God,” one becomes a Muslim.

Muhammad (peace be upon him) was born in Mecca in 570 AD. Since his father Abdullah died before his birth, and his mother Aminah shortly afterwards, Muhammad was raised by his well-respected uncle Abu Talib. As he grew up, he became known for his truthfulness, generosity and sincerity, and he was sought after for his ability to arbitrate in disputes. At the age of 25, Muhammad married a successful businesswoman named Khadija, after she proposed to him after having seen his remarkable character firsthand as his boss. Muhammad (PBUH) had a deeply spiritual nature and had long detested the decadence and sins of his society. It became his habit to meditate from time to time in the Cave of Hira near the summit of Jabal al-Nur, the “Mountain of Light” near Mecca.

How did Muhammad (PBUH) become a messenger of God?

At the age of 40, while in a meditative retreat in the Cave of Hira, Muhammad (PBUH) was visited by the Angel Jibril (Gabriel) who told him three times to “Recite,” before he shared the first revelation from God . This revelation, which Muhammad continued to receive until his death 23 years later, is known as the Quran. As soon as he began to recite the words from Angel Gabriel (first with his wife and then to other Meccans), and to preach the truth which God had revealed to him, he and his small group of followers suffered bitter persecution, which grew so fierce that in the year 622, God gave them the command to emigrate. This hijra or migration, when they left Mecca for the city of Medina 260 miles to the north, marks the beginning of the Muslim calendar. After a decade, Prophet Muhammad (PBUH) and his followers returned to Mecca, where they forgave their enemies, removed the idols from the Kaaba and established Islam. Before he died at the age of 63, the greater part of Arabia was Muslim, and within a century of his death, Islam had spread to Spain in the West and as far as China to the East.

What is the Quran?

The Quran is a record of the exact words revealed by God through Angel Gabriel to Prophet Muhammad (PBUH). It was memorized by Muhammad (PBUH), dictated to his companions, and written down by scribes, who cross-checked it during his lifetime. Muslims believe not one word of its 114 chapters has been changed over the centuries, so to this day the Quran is the same unique and miraculous text which was revealed to Muhammad (PBUH) over 1400 years ago.
The Quran is the last revealed Word of God and the prime source of guidance for every Muslim’s faith and practice, dealing with many themes such as worship, behavior, beauty and the relationship between God and His creations. It also provides guidance for creating a just society, mutually respectful and beneficial human conduct and an equitable economic system.
The sunna, the example of the Prophet, is the secondary source of guidance for Muslims. A hadith is a reliably transmitted report of what the Prophet (PBUH) said, did, approved or disapproved. Belief in the sunna is part of the Islamic faith.

How are Islam, Judaism and Christianity alike?

The three monotheistic faiths originate with the patriarch Prophet Ibrahim (Avram/Abraham), and the three prophets directly descended from his sons: Muhammad from the elder son Ismail (Ishmael), and Musa (Moses) and Isa (Jesus) from the younger son Isaac, peace be upon them all. Abraham established what is today the city of Mecca, and built the Ka’ba as the first house of worship towards which all Muslims turn when they pray. The scriptures of the Abrahamic faiths share common teachings about the omnipotence of God, many of the same chain of prophets/messengers, a call to serve humanity as a reflection of faith, and a common set of values which can loosely be described as “treat others as you wish to be treated.” Certainly, the Abrahamic faiths have many unique beliefs, rituals and traditions from which they draw their uniqueness. In the Quran, Jews and Christians are called “People of the Book” and respected as people who strive to follow God’s revealed word. In fact, the Quran allows men to marry women who are Jewish or Christian so long as they can guarantee their religious freedom and practice.

The Quran tells the stories of a long chain of prophets starting with Adam and including Nuh (Noah), Ibrahim (Abraham), Ismail (Ishmael), Ishac (Isaac), Yaqub (Jacob), Yusuf (Joseph), Ayoub (Job), Musa (Moses), Harun (Aaron), Dawud (David), Sulayman (Solomon), Ilyas (Elijah/Elias), Yunus (Jonah), Yahya (John the Baptist) and Isa (Jesus), peace be upon them. God’s final message to humanity, a reconfirmation of the eternal message and a summary of all that has gone before, was revealed to Prophet Muhammad (PBUH) through Angel Gabriel.

Muslims respect and revere Jesus (PBUH), and await his Second Coming. They consider him one of the greatest of God’s messengers to mankind. The Quran confirms his virgin birth (a chapter of the Quran is titled “Mary”), and Mary, the Virgin Mother, is considered the purest woman in all creation. The Quran describes the Annunciation as follows:

“And Lo! The angels said: ‘O Mary! Behold, God has elected thee and made thee pure, and raised thee above all the women of the world. O Mary! Remain thou truly devout unto thy Sustainer, and prostrate thyself in worship, and bow down with those who bow down [before Him]… Behold, God sends thee the glad tiding, through a word from Him, of a son who shall become known as the Christ Jesus, son of Mary, of great honor in this world and in the life to come, and shall be of those who are drawn near unto God. And he shall speak unto men in his cradle, and as a grown man, and shall be of the righteous.’

Jesus (PBUH) was born miraculously through the same power which had brought Adam into being. During his prophetic mission he performed many miracles. Neither Muhammad nor Jesus (peace be upon them) came to change the basic doctrine of the belief in One God, brought by earlier prophets, but to confirm and renew it. In the Quran, Jesus (PBUH) is reported as saying that he came:

“And I have come to confirm the truth of whatever there still remains of the Torah, and to make lawful unto you some of the things which were forbidden to you. And I have come unto you with a message from your Sustainer; remain, then, conscious of God, and pay heed unto me.” (Quran 3:5O)

What is the role of women in Islam?

This weighty question has been the subject of lectures, dissertations and books. While we can’t provide an exhaustive answer, here is a glimpse of this commonly misunderstood topic in Islam.

One of the most important points is that in the Quran, God praises the equal status and contributions of both believing men and women:

In the pre-Islamic Arabian Peninsula and throughout most of the world, for that matter, women were often considered property, could not inherit and had few rights. In fact, the birth of a daughter was often a sign of misfortune, and many were buried alive as a common practice in pre-Islamic Arabia. In the 7th Century AD, Islam elevated the role of women, bringing them many unprecedented rights and protections revealed through the Quran. This included significant social and political privileges, such as the right to education, marry someone of their choice, retain their identity after marriage, divorce, work, own and sell property, vote, seek protection by the law, and to participate in civic and political society.

However heartbreaking it is to see a decline of women’s rights in some Muslim-majority countries, this is due to social, political and cultural customs which are inconsistent with the teachings of Islam. 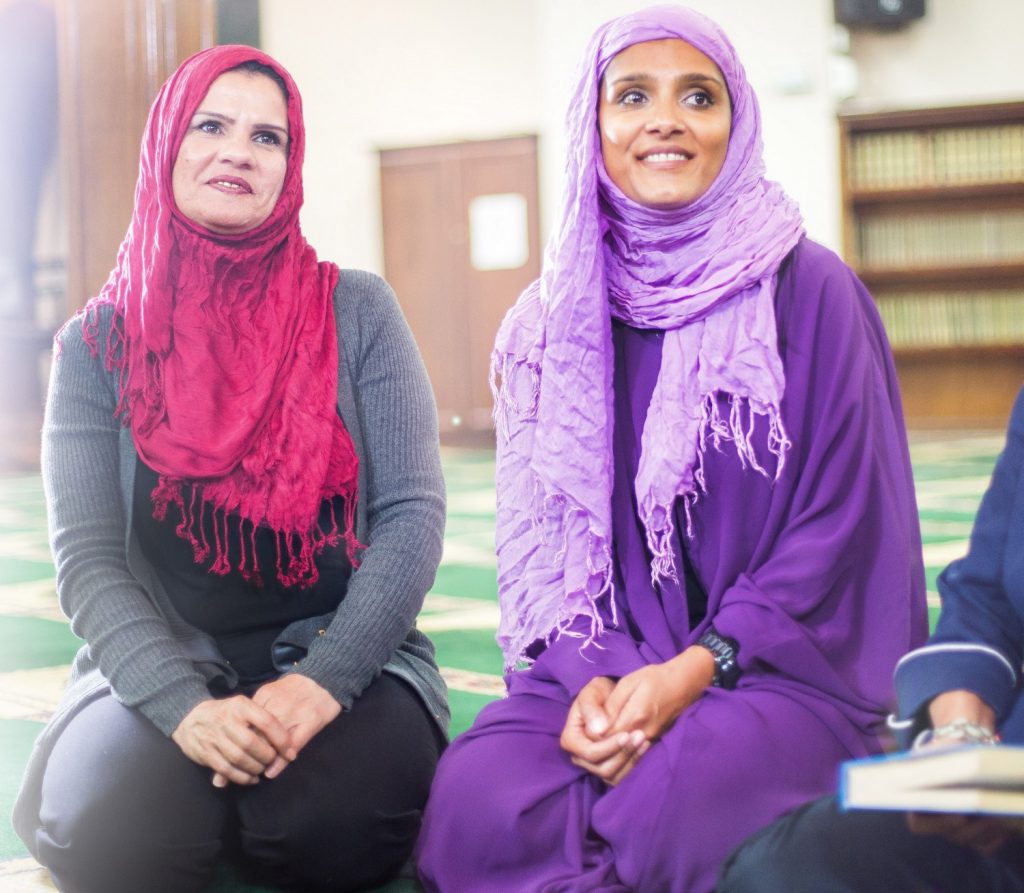 For further discussion on this topic, see the following:

Why do some Muslims resort to violence?

Like all other major world religions, Islam is faith that promotes life and co-existence not violence and death. Any violent acts committed against innocent victims in the name of Islam are acts of terrorism condemned by Islamic teachings. The vast majority of the world’s 1.6 billion Muslims follow a religion of peace, are law-abiding citizens and are concerned about the welfare of their communities. It is dangerously misleading and unfair to draw conclusions about Islam based upon the actions of a small number of Muslims when in fact innocent Muslims are often the primary victims of most extremist attacks. Such is the case with ISIS, with Muslims making up more than 90 percent of their victims.

“Because of this did We ordain unto the children of Israel that if anyone slays a human being-unless it be in punishment for murder or for spreading corruption on earth-it shall be as though he had slain all mankind; whereas, if anyone saves a life, it shall be as though he had saved the lives of all mankind. And, indeed, there came unto them Our apostles with all evidence of the truth: yet, behold, notwithstanding all this, many of them go on committing all manner of excesses on earth.” (Quran 5:32)

Scholars can look at the adherents of nearly every faith, from Christianity to Judaism to Hinduism to Buddhism, and point to examples of individuals committing acts of terrorism. For example, during the Spanish Inquisition, Jews may have thought Christianity is inherently violent because of the actions of Christians at the time, but it is not. There is rarely a direct and exclusive link between religious beliefs and violent behavior. Instead, terrorism is generally caused by a complex web of factors. There are verses in the Quran and obscure and weak hadith that are taken out of context and exploited by terrorist groups to advance their political and social agendas. Since the rise of ISIS, researchers have found that alienated, impoverished and and/or disenfranchised individuals have been radicalized online through slick propaganda videos and heavy recruitment on social media, which exploit loosely-based Islamic teachings to convince their followers and attackers to do their bidding.

The best approaches to countering extremism, terrorism or violence are found in prevention activities, where individuals are offered safe and supportive spiritual environments where they can explore their questions, find support as they face challenges, and find meaningful paths for working for social justice near and far.