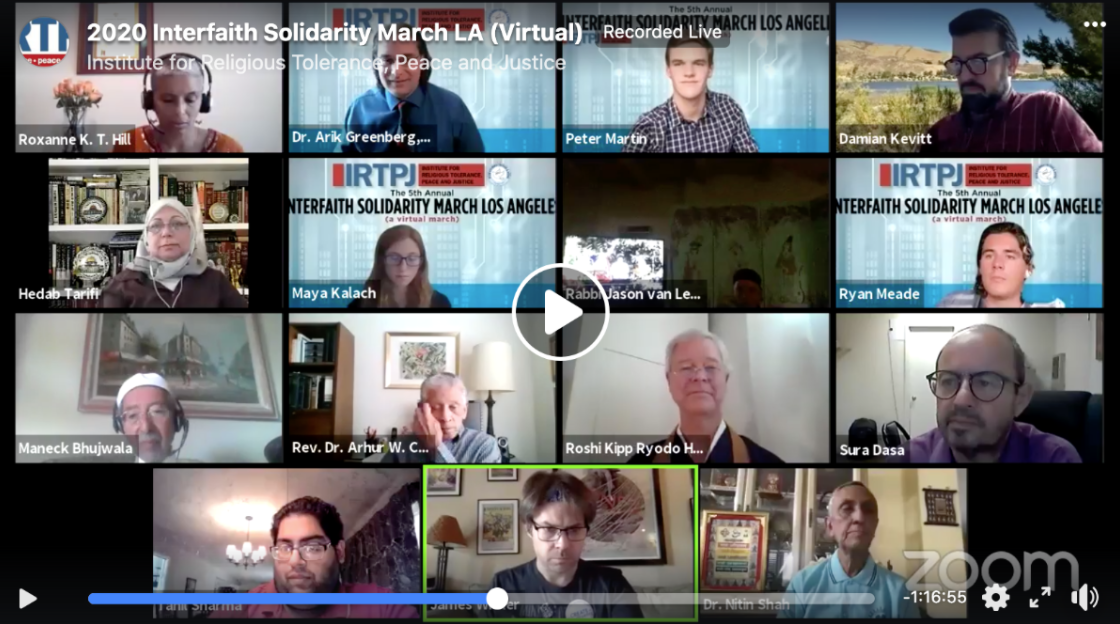 Click on the image above to watch the march!

Hosted on September 13, 2020, the ICSC once again joined the Institute for Religious Tolerance, Peace, and Justice’s 5th Annual Interfaith Solidarity March. Over 20 diverse faith leaders and performers from various backgrounds, including our own Hedab Tarifi, spoke at the rally stressing the responsibility all of us carry to promote peace and justice.

Speakers also shared their views on the role that religion must play in furthering equality, justice, and respect in today’s world for an audience of 1200 people. Los Angeles City Controller, Ron Galperin, and LAPD Chief Michel Moore were among the speakers sharing the roles the City of Los Angeles and LAPD play in bringing peace and harmony in the city in partnership with the community. Speakers representing other marches from Africa and Bethlehem joined the LA march via a recorded video message. New Horizon LA students joined the march through recorded videos of them cheering which brought smiles to everyone attending.

Ms. Tarifi said: “Let us all look beyond how everyone prays. Look beyond the color of our skins. Let us learn from the story of Kane & Able. Don’t be like the one who killed his brother. Let us be like the other brother who said: No, I won’t fight you because I FEAR God. I FEAR ALLAH. Let us go out and spread the word of God’s Love.”

We are proud to be a part of this effort to promote religious tolerance, interfaith dialogue, and understanding as a pathway to world peace.